Fans of the colorful people “Bunte Menschen” kept on asking Roland: “how much money he would charge for a figure.?”
They had found out, that the production cost a lot of money.
Together with his supporters he decided that the profit made by the sale of the figures should be used for a good cause.
This gave rise to a real run for the “Bunte Menschen”.
The donation box in his carpentry filled, but Roland hardly found time for his work as a carpenter anymore.

Supported by the local press he announced a summerbreak of the “Bunte Menschen”.

Roland wanted to figure out how to continue with the project after having given the so far collected money to an organisation supporting Nepal.
After long discussions with friends and supporters he decided that he wanted to continue with the “Bunte Menschen” project.
It was not supposed to remain a singular event. It should not be finished by now.

It was not supposed to remain a singular event. It should not be finished by now.

We don’t know yet how the „Social Nobel Prize“ will work,
if we will be allowed to use that name or we will form a plattform deciding what to do exactly with the money.
We have a dream – we want to make the world a better place.

The Bunte Menschen GmbH lead to the idea of the „Ambassador of the colorful people“. The figures are meant to become a special commodity.
Their spreading by the Ambassadors will be on a national and an international basis. Associations, organisations, institutions,
companies and individuals can become such ambassadors.
They are supposed to tell the story of the Bunte Menschen and to announce that they are a sign for freedom, diversity and tolerance.

Each ambassador can buy as many figures as he wants (at a fixed price) and thus support the „Social Nobel Prize“.
In addition he can sponsor his own charity campaigns by selling the figures. He should use the profit of the sale for another good purpose.
Thus he supports the Bunte Menschen Gmbh and any other charity project he chooses,
which would be in the sense of the father of the Bunte Menschen, Roland. An ambassador should not sell them for less than 5.- Euros.

Example 2: A company becomes ambassador and spreads the idea of the Bunte Menschen to its clients. It organizes an event for 300 participants.
The company buys 1000 colorful people for 3,50.- Euros and sells them to its clients for 5.- Euros.
The clients know that the profit is supposed to be given to an hospice. The profit would be 8000.- Euros.
As a result the hospice would gain 4500.- Euros and the Bunte Menschen GmbH 3500.- Euros.

Example 3: A soccer club becomes ambassador and buys 50 000 figures in the context of a fund raising campaign.
Each visitor of the sold out soccer game finds a figure at his seat and they hold them up at the same time as a sign of diversity, freedom and tolerance.
The television crews broadcast this demonstration, inspiring others to do so. The expenses: 175 00.- Euros. The media impact on the club would be tremendous.

We are hoping for pictures from all over the world showing our Bunte Menschen, then we will know that the idea of them has been spread successfully. 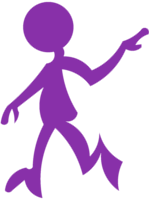 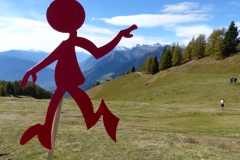